For the life of me I can’t remember that first time I crossed paths with Adam Domet. It’s not that the man isn’t memorable because he truly is. It’s that he integrated so seamlessly that I can’t quite remember a time that he wasn’t pouring me Cosmopolitan slushies and making me laugh to the point of tears. 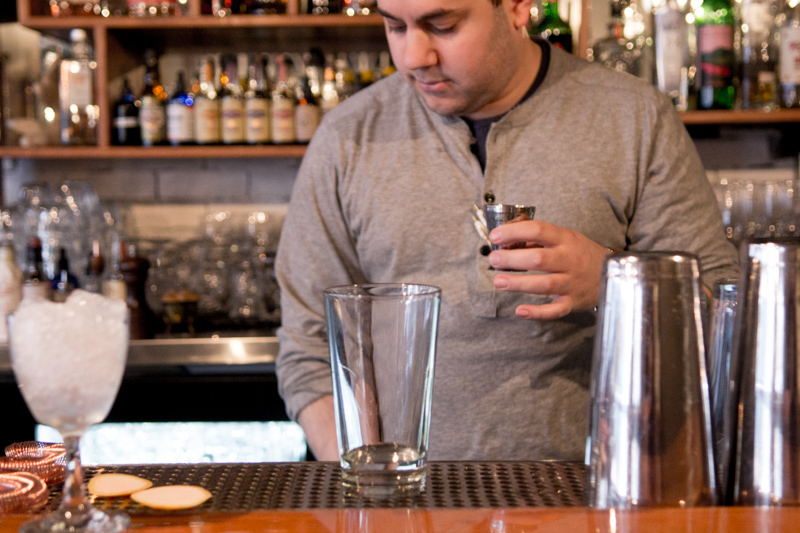 An unconventional path to the bar, Domet started his career as a high school janitor in Toronto (if you ever have the good fortune of meeting him, you’ll understand why this is funny). There was a brief stint at Swiss Chalet (while not quite the setting for him, he remembers the gravy fondly). He eventually made his way west and found himself with a job bar backing at The Diamond. From there he worked his way up to bartender and eventually moved on to such notable establishments as Bufala and now Supermarine where he manages the cocktail program. 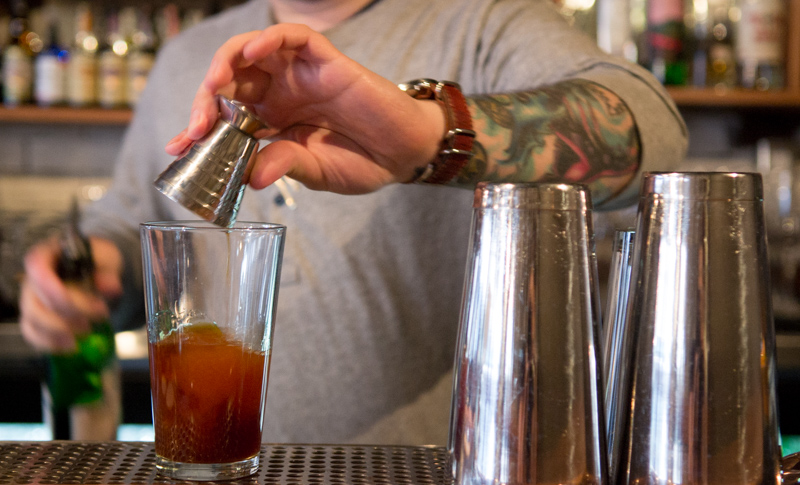 A great sense of humour may be his calling card, but Domet takes the job seriously. In chatting with him, it’s clear that he feels the weight of his predecessors on his shoulders and wants to live up to the standards they set as some of Vancouver’s most accomplished bartenders. So without further ado, I present the only bartender I know who can find a way to fit Emilio Estevez, JFK and hair metal bands into a single interview.

What’s your least favourite word?
No.

What turns you on?
Efficiency. Caring. General positive disposition.

What turns you off?
The opposite of those things. Laziness.

What sound or noise do you love?
Water dropping in a bucket.

What sound or noise do you hate?
Certain people with loud voices.

What profession would you not like to do?
A high school janitor cause I did it before and I wasn’t very good at it and I didn’t like it.

If heaven exists, what would you want God to say when you arrive?
Double bourbon and a pale ale?

Which talent would you most like to have?
Any of them? I would like to be really good at playing the piano.

Your favourite fictional hero?
Gordon Bombay- Head Coach of the Mighty Ducks in D1 and D2 and then came back as the ambassador for the Junior Goodwill Games in D3. The Minnesota Miracle Man. The Breakfast Club Boy.

Which historical figure do you most identify with?
John Kennedy. I feel as though someone is looking to take me out all the time.

What is your most treasured possession?
I’d say my watch I guess. I don’t really have a lot of cool stuff. It’s a Shinola. People often compliment me on it.

If you could choose to come back as something in your next life what would it be?
Ben Affleck. But like Holden McNeil, Chasing Amy. Not AJ in Armageddon.

If you could only have a 5 bottle bar, what would they be?
Rittenhouse Rye, Cognac, Cinzano Sweet Vermouth (I like it cheap and cheerful), Benedictine, Peychauds Bitters.

What would be your death row drink?
A Buck Buck Mule- gin, cucumber, fino sherry, fresh lime and some ginger beer. It’s a Diamond drink.

What’s the one cocktail book that should be behind every bar?
PDT

What’s the one non-cocktail book that should be behind every bar?
How to be Popular with Boys

If you’re best shift behind the bar had a theme song, what would it be?
Pet Sematary- The Ramones

Is there anything you would like to add about the Vancouver bar scene? Thoughts? Insights?
There’s a lot of really talented people and everyone just keeps getting better. I wish there were more people in Vancouver that would come out and drink more so that we could all work more.

If you could only be known for one cocktail that you’ve created, what would it be?

Take My Word (a twist on The Parliament which is an old drink from The Diamond):

Shake all ingredients over ice. Strain into a chilled cocktail glass misted with with Ardbeg 10yr.

Is there anything that you wish I would have asked that I didn’t?
Briefs.

Back in June I had the good fortune of interviewing Alex Day when he was in town for a cocktail competition. To say that…