In many of the interviews I’ve done with bartenders over the years, I often ask about the one cocktail book that should be behind every bar. Jeffrey Morgenthaler’s The Bar Book has been named more times than I can count. It has spoken to a generation of bartenders that have put stock in Morgenthaler’s accessible, technique-driven approach to the craft.

It has been three and a half years since I last sat down with Jeffrey Morgenthaler to talk about The Bar Book. And now with the release of Drinking Distilled, we decided to catch up again at Clyde Common to chat about his new book, his future plans and the new rules of drinking. 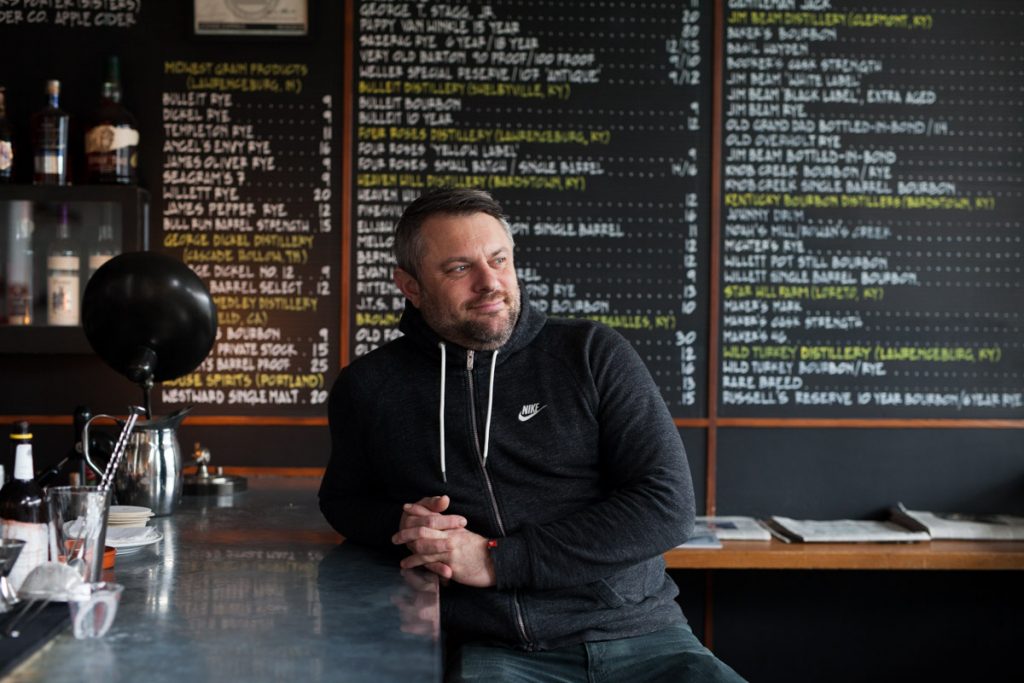 “How to drink good.” As opposed to “how to drink well”. It’s not about how to drink elegant cocktails or anything. It’s how to be good at drinking.

Why this book and why now?

Because there haven’t really been any great primers on how to drink. I think it’s time to re-address the rules of drinking because – with this whole cocktail renaissance – you see all these things like “Real men drink Old Fashioneds but they don’t take rocks in their whiskey,” or “A gin martini should never be shaken,” or “A vodka martini is not a real martini.” All these kind of bullshit articles you read by grumpy old men who think bars used to be so much better before cell phones were invented, and they fucking weren’t. So, maybe it’s time for some updated rules. As you would expect coming from me, they aren’t the same old hashed out drinking rules you see time and time again.

Did you feel like you were the person to write the book or that the book needed to be written and so you did it?

I felt like I was the person to write the book. I guess I have the authority to talk about a lot of these things having done it for so long. Armchair commentators with an overly romanticized idea of what a bar should be kinda bore me.

Was there anything that you wanted in the book that didn’t make the cut?

No actually! Well there was one thing. I wrote a whole long thing about absinthe that didn’t make it in because we decided that absinthe was a little bit passe, it’s a little bit specific. Absinthe doesn’t really fit into normal drinking. Nobody really drinks absinthe anymore.

Are there any albums or specific music you listen to while writing?

I usually write in the morning and mornings are always spent listening to Nick Drake.

Bartending and the craft cocktail scene has changed significantly since you first started in the industry. What do you see as the most positive change? What change would you still like to see?

The most positive change is obviously that you can get better drinks most places. When people come into Clyde and ask “Do you have fresh lime juice or is it sour mix?” I’m like, “Are you kidding me!?” I had this guest the other night ask me if we make our margaritas fresh or with margarita mix. It’s 2018! Applebees makes their drinks with fresh juice. You can get fresh drinks at the airport. I think that’s the biggest thing that’s pretty cool.

The downside ties back to the book. I think that people have forgotten how to drink. When we were doing brunch at Clyde I would get guys coming in drinking Manhattans because they were “cocktail snobs.” Drinking Manhattans with their brunch. That’s not what a Manhattan is for. That’s not what brunch is for. You’re like crawling out of a restaurant at 2 o’clock in the afternoon because you had four Manhattan’s. It’s a stupid way to drink but they were so young and they started with craft cocktails. Nobody told them that there’s a right and a wrong way to drink cocktails, a right and a wrong time to drink cocktails.

Was there a book or an inspiration you drew upon for Drinking Distilled?

I looked through a bunch of my favourites. One of them was Trader Vic’s Bartender’s Guide. If you’ve never read the first third of Trader Vic’s before he gets to the recipes, I highly recommend it. It’s amazing. Also William Grimes’ Straight Up or On The Rocks.

How do you see the role of the bar and the bartender changing in more intense political times? Or do you?

I’m not telling you that.

A sound or noise that you love?

Probably the sound of a fan in a bedroom. I need it to fall asleep.

A sound or noise that you hate?

A profession other than your own that you’d like to attempt?

A profession that you’d hate?

If heaven exists, what would you like God to say when you arrive?

We’ve saved you a seat at the bar.

I wish I could play piano.

The strangest talent that you already have?

I’m actually a former diver. In highschool I was on the swim team and I became the one-man diving team. California. It’s that kind of place.

I really like the Fletch books. You know Fletch the movie with Chevy Chase? Classic 80’s. That’s actually a terrible movie taken from a series of books that are fantastic. He’s kind of a flawed hero. That’s one of my favourite fictional heros. He’s a reporter.

What keeps you up a night?

I worry about how to make my bartenders’ lives better.

What is your biggest character flaw?

I’m pretty bad at letting other people help me.

The character flaw that bugs you most in other people?

People that drink and drive.

What do you want to be remembered for?

Just all the stuff that I’ve shared over the years for bartending and cocktails. That’s why I do it – just to help. So I’d like to be remembered for that. And the book and the blog and all the things I’ve done to try to help.

Thus concludes the formal questions. Anything else you’d like to add about the book?

So there’s a neat thing about the book that a lot of people don’t know. The illustrator is one of my former bartenders and she left us to become an illustrator. I had always wanted to have my first book illustrated and they didn’t let me. The pictures turned out great but I always wanted to have an illustrated book. So when we were putting together the deal and the proposal, without her knowing, I was fighting to try to get her the job. She didn’t have a huge portfolio so it was like going back and forth with the publisher . They finally said yes. I hadn’t even asked her if she wanted to illustrate my book. I got to call her up one day and say “I don’t know if you want it but I got you a job illustrating my next book.” And she was really excited about that.

I knew she wasn’t going to say “No, fuck you,” but if she had, we would have just gone back to the drawing board. I really wanted to work with her again.

So what was the process like between you two to come up with the illustrations?

My editor and I knew that there were going to be 30 illustrations so we singled out 30 things that we wanted illustrated in the book. It was a big process. I had to write the book first. So I wrote it and then we edited it and then we started going through it. There was a back and forth between my editor and I trying to narrow it down and then we went to Sami with the 30 things we wanted illustrated. And then she got to suggest changes as well. She had a very concrete list with notes. She and I talked it out and she did sketches and that was kind of the process. It was fun. She’s awesome.

What’s next for you? Are you just going to keep chilling behind the bar?

Anything else about your career? The Portland bartending scene?

I don’t really go out. I probably know more about the Berlin bartending scene, I spend more time in Berlin bars than Portland bars. I mean, everyone is doing great here. It’s a thriving community.

Cocktail Of The Day (because it’s always cocktail hour somewhere in the world). This week we are doing a special edition #COTD. Extraordinary bartenders…