A few months ago I received an email from a couple in Southern California that had recently acquired a vintage Airstream camper and converted it into a fully functioning bar. To say I was intrigued would be an understatement. Pat and Abbey’s day jobs could not have been further from the bartending world. While one works in  environmental conservation and the other in consultation around tech start ups, they found their passion for craft cocktails too strong to ignore. 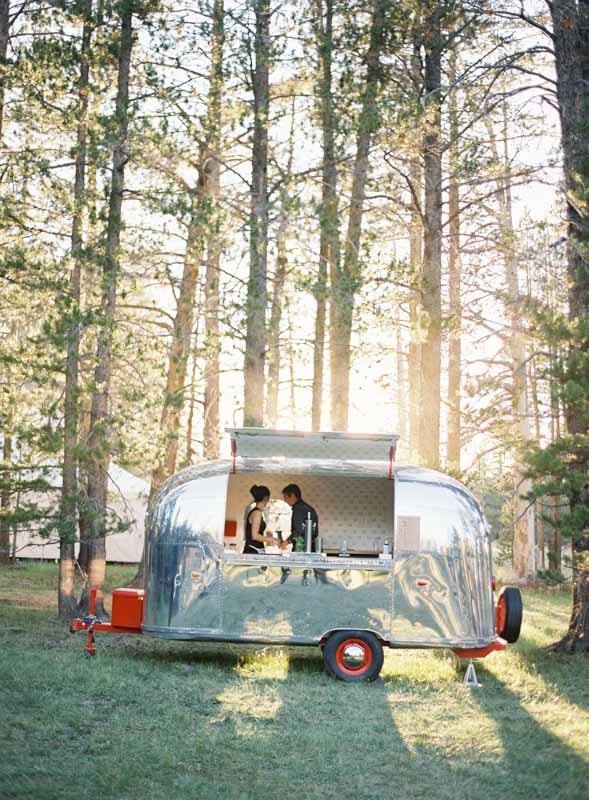 The origins of their new venture begins like most- a conversation that led to an idea that led to further conversations that eventually resulted in a decision to take a leap. While the undertaking didn’t involve a garage, it did involve a driveway and many, many hours of repair, design, dismantling,  and remantling (is that a word?). They enlisted the help of friends, family and even a fortuitous neighbour with a background in vintage airplane repair. The couple literally had their hands in every aspect of their new venture from building to recipe design to actually serving their cocktails at parties and weddings.

I’ve always believed that a good experience at a bar has as much to do with the folks running the joint as the drink that’s placed in front of you. Pat and Abbey’s adventure just goes to show that your favourite bar can be anywhere from a 5 star hotel in LA to a dive bar in Brooklyn to a camper in the middle of the woods. 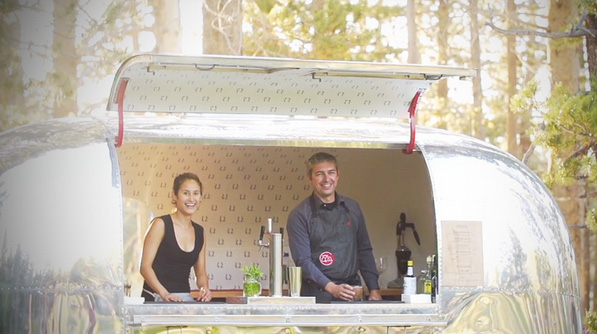 When you were both kids, what did you think you’d be when you grew up?

Pat: Go back young enough and I’m sure it was some variation of the movie character Steve Zissou from Life Aquatic (apparently Wes Anderson shared this dream), but what really stands out is the answer for my high school yearbook which was “One day I want to own a restaurant just so I can go there to eat.” Growing up, dining out was a rare occasion that always meant a lot – the idea of meal as a chance to try new things and enjoying someone’s culinary creativity was a big deal. While most of my professional life has been in just about every other direction (Coast Guard, barista,  Portland Brewing Co, public relations specialist, farmer’s market stand, publishing, renewable energy sales and consulting and etc), my hobbies have always been food and drink related – Camper Cocktails is the closest point I’ve reached in matching professional interests with what I’d be doing in free time.

Abbey: I’m hyper-vigilant and notice all the details, so I always thought I’d have a career in law enforcement or with the justice department. I didn’t realize that when you “grow up” you can, and should, be a lot of different things. I love the variety I get to experience with each of the different paths I pursue professionally. Camper Cocktail Company is the perfect one for my creativity and event work is all about the details, which I love!

What were you each doing for work prior to purchasing the Airstream Bambi?

Pat: We’d love to tell you how we chucked our oppressive corporate jobs to design drinks from the comfort of a vintage Airstream, but the truth is we still enjoy our “day-jobs” too. We both work in other fields as well as event hospitality. I work for an environmental foundation based in Portland supporting clean energy and water conservation.

Abbey: In addition to Camper, I have a consulting practice focussed on business operations for start-up energy and tech companies. I think we’re like a lot of mid-career people these days finding that it’s important to have multiple professional interests to draw from and rely on.

Pat: In terms of Camper Cocktails, we’re part of a very new category in event drinks service that most people aren’t yet aware of. Our goal is to offer a better alternative to the typical business conference-style event bar, where everyone just orders vodka tonics, because that’s all they can think of on the spot or they don’t have the same confidence in the bartender they might have at their favorite restaurant or bar. The exciting part is see that events are responding and guests are thrilled to have the same level of attention paid to drink service as the other elements of the party.

Can you recall a specific moment/conversation/experience that made you decide to pursue a business in bartending?

Abbey: There was no one single moment, but a series of conversations where one of us would throw some aspect of the idea out to the other and we’d kick it back and forth talking ourselves in and out of the concept. It’s a great partnership that offers both enthusiasm and the occasional reality-check when needed – Camper Cocktails probably wouldn’t have happened if it was just one of us. The shot that finally got us to spring from the starting blocks was when my sister, Jenna (of Jenna Lam Events), got excited about the idea and insisted that events are ripe for craft drink catering. She loved the idea of fun drinks from a retro Airstream so much that she had us booked before we had even completed the renovation.

Where did the idea for the mobile craft bar come from?

Pat: We met in Portland, Oregon where all cool culinary-related ideas seem to start in a cart or small farmer’s market booth. We had also seen other examples of Airstreams used for events that seemed to be about offering a hideaway space for people to hang out, such as a “man-cave” for groomsmen to occupy while waiting on a wedding ceremony, or another one that could be dropped off as a fully-stocked self-serve bar for sports tailgating events. What we didn’t see was one that used the natural draw of a shiny vintage Airstream to offer the type of drinks and level of service we get excited about.

Abbey: This wasn’t without some risk though, we could have been seen as just a gimmick but quickly learned that while the Bambi draws people’s curiosity, it’s our drinks they go home raving about.

Pat: The biggest challenge was finding and refurbishing an Airstream trailer. Ours is a 1961 Bambi (the smallest they make) and is currently highly sought-after (Airstream seems to be having a moment now). We scoured eBay and Craigslist across the U.S. for over 6 months before finding ours on eBay in Colton, CA – and that’s when the real work began. High-tech guys always talk about how their ideas started out in the garage. Well ours was in the driveway – right out in the open for everyone to see as we completely dismantled, redesigned, and then rebuilt the Airstream by hand. (I should mention that neither of us had even been inside of an Airstream before we went to purchase one.) Being on display for the neighborhood we had just moved into didn’t seem ideal at first, but led to an incredible stroke of luck when our across-the-street neighbor, Kiese Albayati, offered to help. He was trained in rebuilding damaged commercial airplanes and knew all about riveting, specialty metal work, and fabrication & design. We couldn’t have done this without him. There are some great shops around the U.S. that will do this type of restoration for Airstreams that would have been a much easier path, but the costs are steep and prohibitive for a small start-up venture like us. And we have great pride in having taught ourselves how to do all this and now we have intimate knowledge of every inch of our trailer down to the frame.

Abbey: The most rewarding thing has been experiencing people’s reactions to our idea. Everyone has been so excited and supportive of our concept – we hear “this must be at our party” all the time. It’s been exciting to take a concept and build it out ourselves. Beyond the hands-on work, we also invested in ourselves. It’s funny to care about, but we didn’t need Kickstarter or a small business loan, we seeded ourselves – Camper Cocktail Company is all us.

What is your favourite cocktail you’ve had on a menu and how do you make it?

Pat: This changes all the time and I’m currently on a mission to try a different drink every day of 2015 and write about it for our website (my New Years resolution for 2015). My new favorite is one we created called the Oaxacan Rose. A rose is a sub-category of sours that use pomegranate syrup (Grenadine) as the sweet element of the drink and I’m sort of obsessed with them. Here’s the recipe:

2oz Mezcal (we use Fidencio or Mina Real)

1tbs pomegranate syrup (we like the one from Sonoma Syrup Company)

Combine ingredients in a shaker tin over ice, shake vigorously until you see frost on the shaker and double strain into a sour glass served up. Garniture is a brandied cherry. 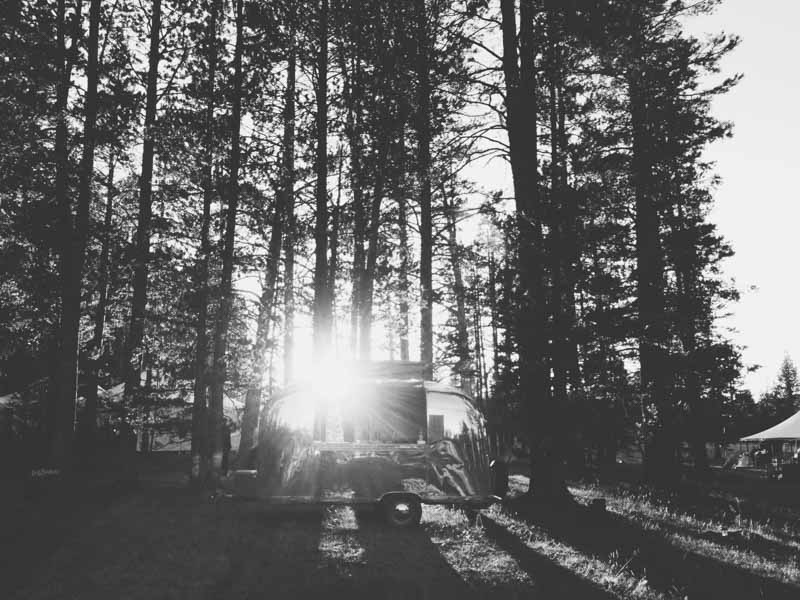 Cocktail Of The Day- because it’s always cocktail hour somewhere in the world. For the summer months, we’ve round up a few warm weather sippers…