Every time I drive to Expatriate, I’m sure I’ve gone the wrong way. I make my way through winding Northeast Portland roads amidst rows of residential houses, convinced I’ve lost my way. But sure enough, I make one final left hand turn onto NE 30th and as if out of  nowhere it appears- a small brick building that used to house a hair salon and is now home to one of the best drinking spots in the city. Perhaps it’s the unsuspecting location that makes Expatriate a place that is constantly being discovered and rediscovered. It’s been open for 4 years and people still ask “Hey! Have you ever been to Expat?” I have. It’s amazing. 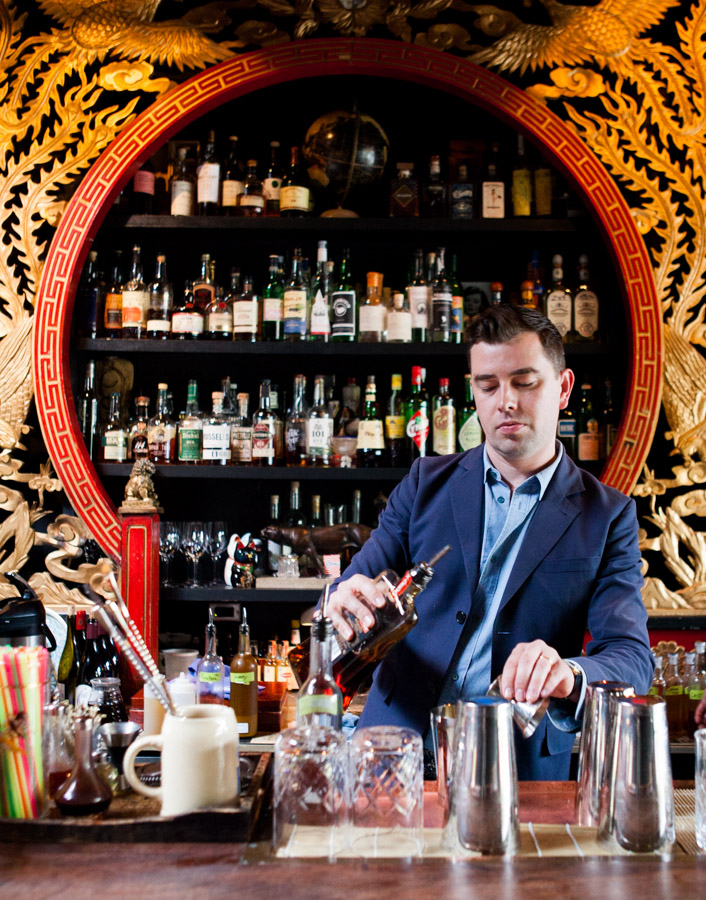 On my most recent visit, I had the opportunity to sit down with co-owner Kyle Linden Webster. It was the day after his birthday- or shall I say that day after the one year anniversary of Prince’s passing (a fact that clearly meant a great deal as there is now a dedicated Prince shrine to the right of the bar). We sat down over coffee to talk the past and present of Expat as well as future plans that surprisingly include a new flower shop! Check it! 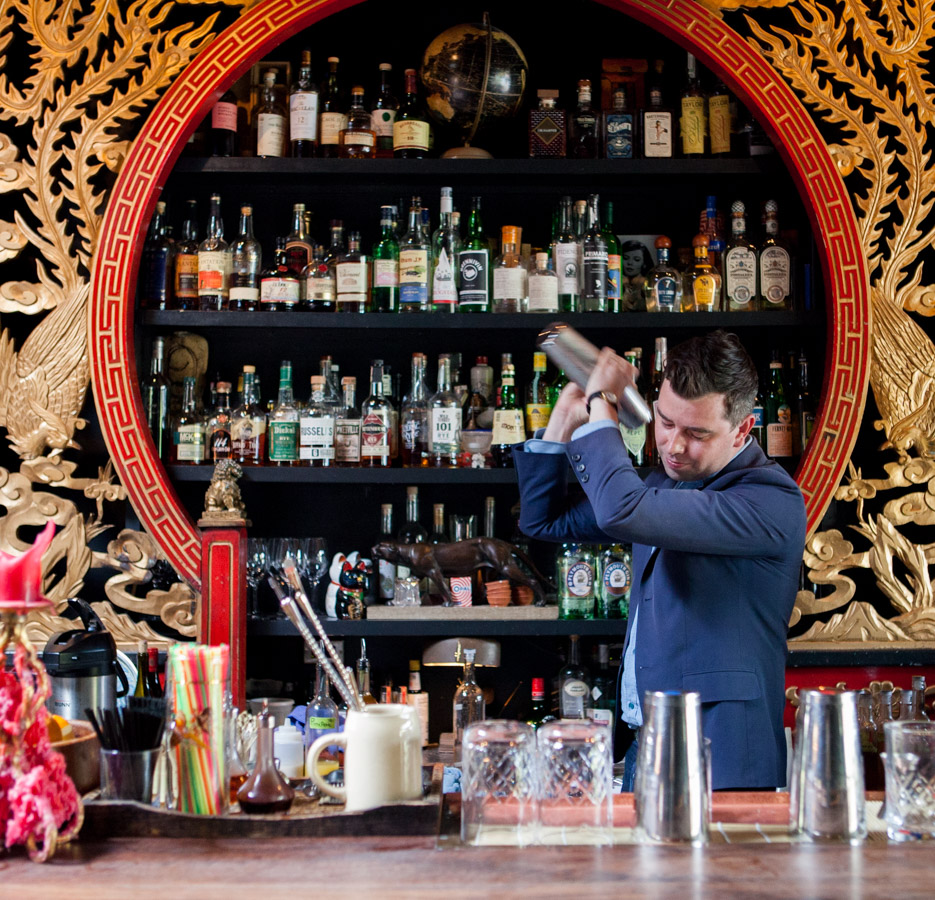 I thought that I would be a lawyer but that’s when I was too young to actually know what I would be….like 9 or 10.

I think the next thing I realistically wanted to do was open a record shop and that would have been in my mid-to-late teens.

Probably something really boring. My parents don’t really drink and they never had booze in the house so it wasn’t like I was sneaking sips of things. It was probably a sip of a beer

Do you remember the first time you got drunk?

Oh yeah. My best friend lived outside of the small town I lived in in Wisconsin and his parents were away so we had six acres to ourselves. I believe I made the acquaintance of a bottle of Malibu rum which I did not soon forget. I was probably 16 or 17. I was not a very precocious youth.

January 2nd, 2008 at a dive bar in Clackamas. It’s no longer there. I loved it. I worked there for 8-9 months. From there I talked my way into the first of many jobs I was not qualified for which was a position waiting tables at a pretty nice wine bar. I had never waited tables and I didn’t know that much about wine.

Was there a specific moment, conversation or experience that made you decide to pursue bartending as a career?

Before either of those places I had been finishing up my schooling and coming from several years working for a big HMO and I was a bureaucrat. I was married and had two little kids and bought a house and I was absolutely miserable. I decided to go back to school which was something I really had no interest in finishing even though I was really close. I did that and as I was finishing my first year I was looking around trying to figure out what I would do when I was done. I did not want to go to graduate school which was what everyone around me was doing. I decided I wanted to open a bar and I conscientiously applied to 100 different things that didn’t work out but there was that one.

Once you were behind the bar did you just know?

It was even before that. It wasn’t so much the act of bartending because I had never done that so it was theoretical. It was more the environment that you’re able to create in the context of people coming to a place together and enjoying themselves.

So how did Expatriate come about?

I had been looking for space for about six months. Nothing had come through….things always fall through. I had tried to open two other bars before Expat in years prior. My wife and I were sitting in Beast and we saw this gal moving out of what is now Expat. It was a hair salon and she was shuttering so we found the landlord.

So you didn’t actually plan to open up across the street from each other?

So what was the inspiration for the bar? When you initially thought about opening a space, was this it?

No, this was specific to the space and the time I guess. I don’t know, I think coming up with bars is the fun part and I have like twenty of them that I haven’t opened yet. It’s an ongoing thing.

You know how many books there are at Expat! Goodness, I don’t know. Just something interesting to read. You don’t need a reference tomb. Just something to grab people’s attention if they want to be distracted.

If you could make a cocktail for anybody dead or alive, who would it be and what would you make them?

I’ve been thinking a lot about Prince because he died a year ago, yesterday. And obviously we’re big fans over there- we have a shrine. A guy who used to work for me- Edwin Cruise from LA, he’s actually back there now- he made Prince a drink in The Spare Room at the Roosevelt Hotel. It was some sort of sickly, sweet fruity martini. But that’s apparently what Prince liked. I would love to make some sort of berry martini, purple probably, for Prince.

If your best shift behind the bar had a theme song, what would be playing?

Well at the beginning it’s always the Top Gun soundtrack. I still sometimes put that record on at 5pm right as we’re opening. It makes everybody laugh.

Your favourite fictional bar from TV, movie or book?

I’m not going to say fucking Cheers or something. I’ve never seen Cheers. I walked past it in Boston about 6 months ago. It was garishly lit. There’s this Scottish movie that come out in 2002 called Morvern Callar and it’s about this gal in a small town whose boyfriend kills himself and she steals his life trajectory and he’s a writer. So she changes the name on the manuscript to her name and publishes his book and runs off to Spain. There are these beautiful bars…well not beautiful. There are crap pubs in Scotland and crazy night clubs in Spain. Great, very strange, dark movie. Evocative. Just atmosphere.

If you could only be known for one drink you’ve ever made?

That would have to be The Lost Weekend. My second date with my now wife- all the nice bars were closed so we ended up at a dive on Mississippi called The Crowbar. I ordered a tequila and a beer which is what I do in those situations. She ordered a Bulleit bourbon on the rocks with a big slug of amaretto and a lime wedge and I definitely turned my nose up. We were talking about many things, John and Yoko among them and John’s lost weekend- he was actually gone for about two years and partied his face off with Harry Nilsson and Keith Moon. They had houses that were just animal houses. Anyways, the next day I wake up I’m in the shower and decide I’m going to fix the drink and I’m going to call it The Lost Weekend. At the time I was living three blocks from St. Jack where I ran the bar at that point. I went there and just made it in one go. And it went on to be the best selling thing ever. It’s on the menu at Expat right now. I wanted to get away from it so it never appeared at Expat until recently. It was a St. Jack classic.

Do you have anything you want to add about bartending, about running a bar, about Portland bar scene, about cocktails, or any questions you wish I would have asked that I didn’t?

No. I’m one foot in, one foot out cause I don’t pull regular shifts anymore. Again, I’m sort of a bureaucrat. I worked my way out of a job. But that’s a good problem to have. This next thing that I’m doing is kind of an effort to remain in this sphere in this world but also stay sane because the thought of opening other projects- which I’ve flirted with in the last couple of years- I don’t think that it’s sustainable given where we are in terms of this city growing and where we are in terms of the restaurant and economics shifting right now. Everything is becoming cost-prohibitive if you want to give any level of service or use good product. And I’m keenly aware of that so I’m looking forward to selling flower arrangements.

Shake ingredients over ice. Strain onto a large cube and garnish with a lime wedge. 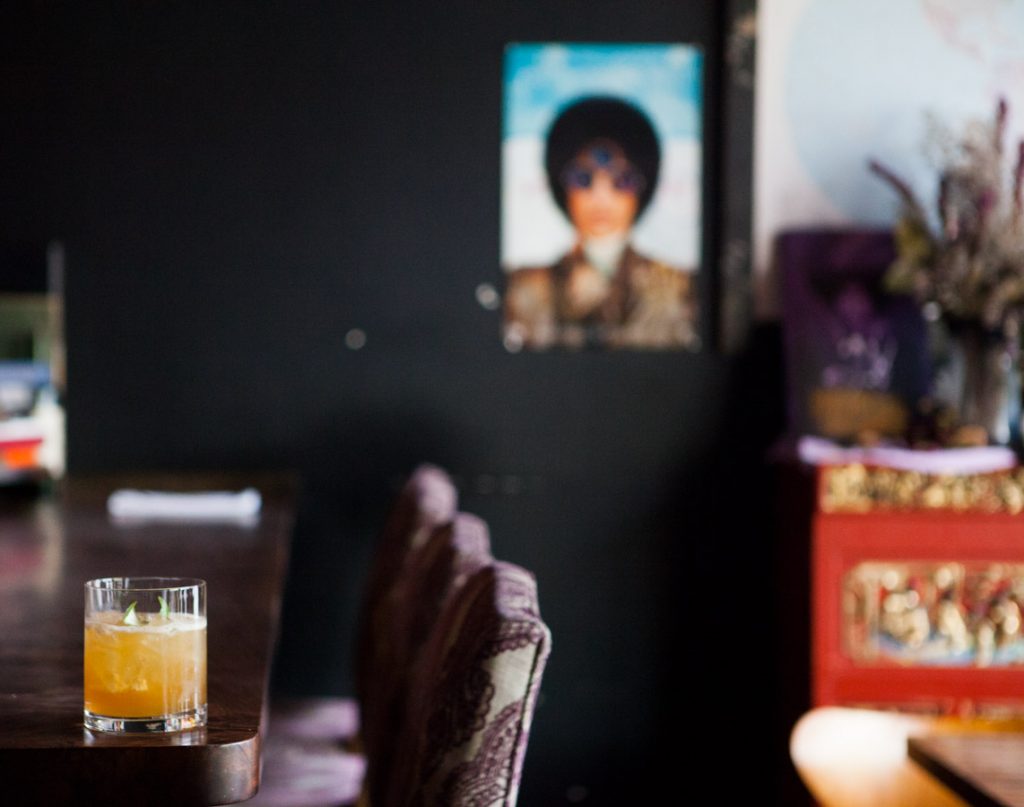 So I know I had retired The Bartender’s List a few weeks ago as it was intended to be a summer series. And the…