I hadn’t been back to New York City since my love affair with craft cocktails began. Arguably the motherland of craft bars, I set my sights on New York early in 2015 but wasn’t quite sure how or when the trip would happen. So imagine my delight when SAVEUR Magazine announced they would be hosting their 6th Annual Blog Awards in Williamsburg [sidenote: For those that are visiting the blog for the first time- 1) Welcome and thanks for stopping by and 2) Two For The Bar had been nominated for a blog award in the category of Best Cocktail and Spirits Coverage]. 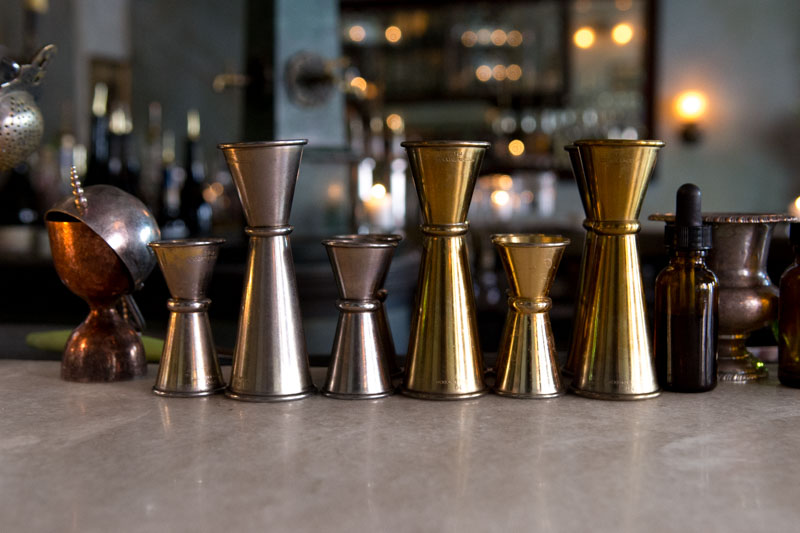 I don’t love the term “bucket list” but I think in this case we’ll just call a spade a spade. Once the flights were booked, I quickly put together a list of a few of the spots I couldn’t bear to miss. The problem, of course, is that four nights is never enough when it comes to New York City. And a short list of five bars quickly grew to more than twenty with no hope of seeing them all in such a short amount of time. Lesson learned: When it comes to New York City give yourself at least a week….or nine. 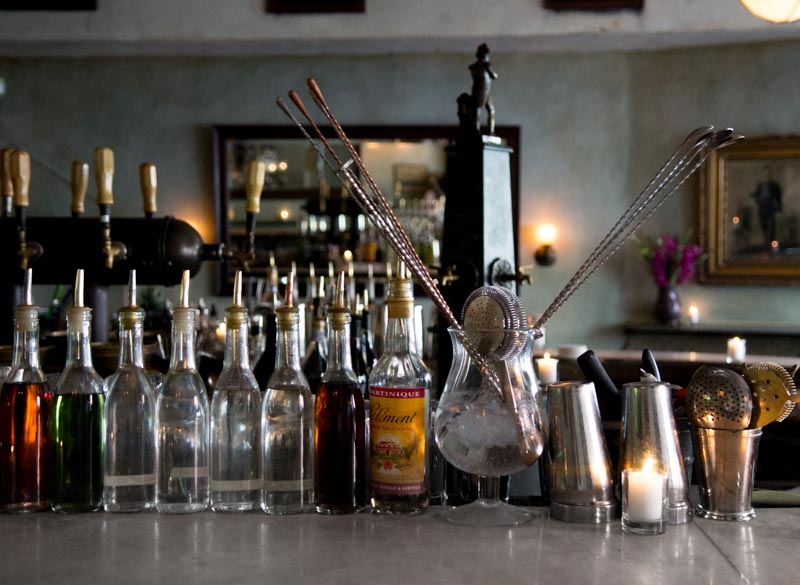 Over the next few weeks I’ll be sharing a few of the spots I did manage to see. This is by no means representative of all of the bars worthy of a visit should you find yourself in New York. But they are certainly worthy of a short list- each one very different from the next, all outstanding in their own right.

First up- Maison Premiere. To set foot inside this space is to be transported back in time. Every detail is attended to and pays homage to an old world sensibility from the tarnished silver to the Napoleon-topped Absinthe fountain to the suspender-clad bartenders. The ever-shifting light spilling through the windows results in a dynamic mood from hour to hour. Each well-thought-out detail sets the stage for a stunningly curated list of seasonal cocktails. It’s no wonder Maison Premiere has been held in such high regard pretty much since the day its doors opened in  2011. The spot was quickly named one of the best bars in America by Esquire Magazine and has been a James Beard Finalist two years in a row for Outstanding Bar Program. 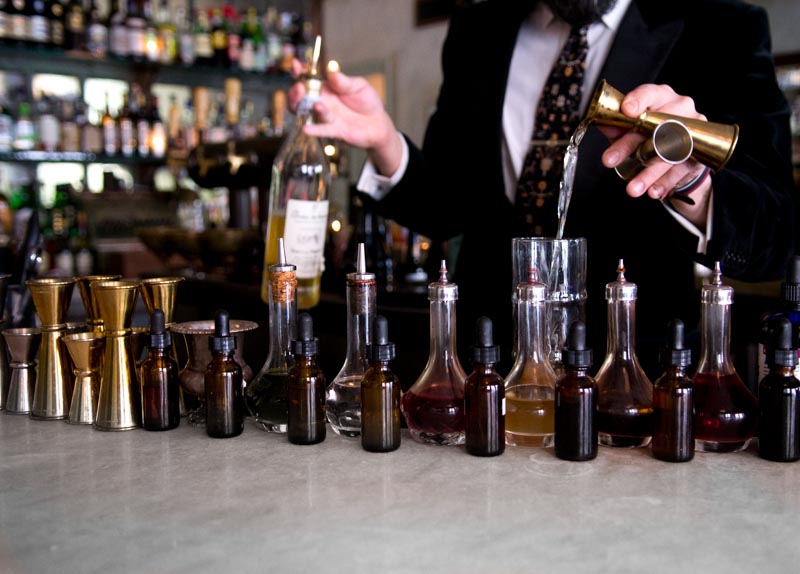 I spoke with Head Bartender Will Elliott and asked him to make me a cocktail from the list that perhaps was slightly unassuming. He pondered for a moment and then explained that it was somewhat difficult to find one that fit that bill. Each cocktail from the menu had it’s niche and it’s own audience. Elliott showed me a few photos from the spring menu and I immediately understood why it was so difficult to choose. He explained that the menu changes every three months. The process is all-consuming as ingredients and spirits are carefully selected to reflect an ever-changing seasonal offering. After much deliberation, we landed on The Kingfisher- a variation on a rum swizzle made with Duquesne Rhum Agricole Eleve Sous Bois, Orleans Bitters, pineapple, lime and cane syrup. 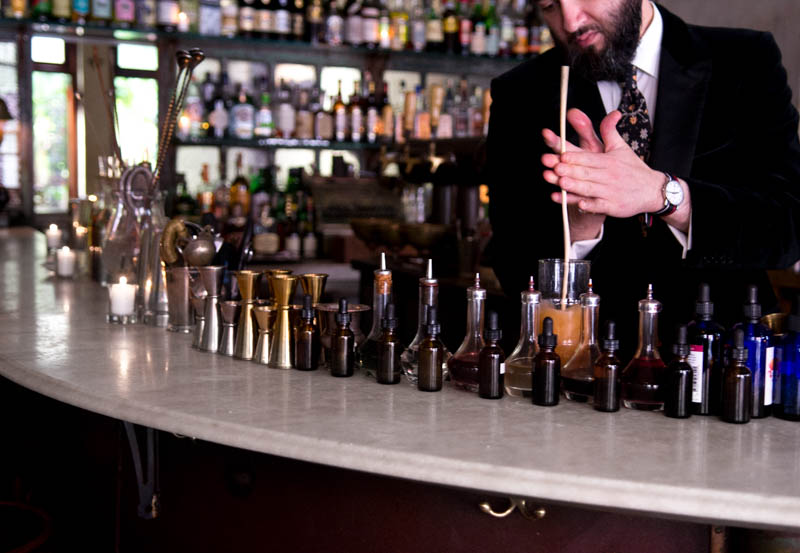 My only regret with my time spent at Maison Premiere was that there wasn’t enough of it. I could have sat at the bar for hours watching the bartenders meticulously attend to every detail as the fading light slipped into evening and the beautifully dynamic mood of old world space shifted again. 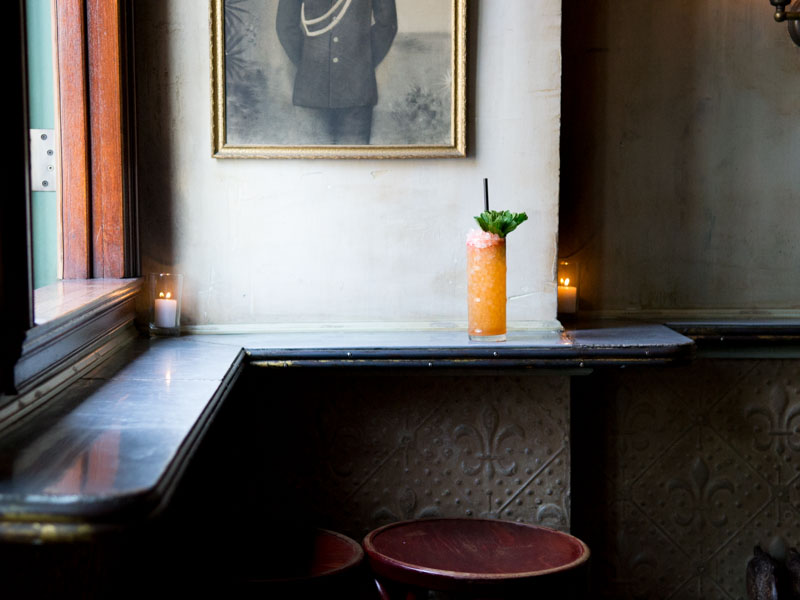 Welcome to the 8th instalment of Bottom Of The Barrel- a collaborative effort between Two For The Bar and Joann Pai of Acorn Mag….