Three years ago I stepped into Clyde Common for the first time and sat down at the bar. For the life of me, I can’t remember the first cocktail I had there, but I sure remember the person that served it to me. Beckaly Franks is just that memorable. Striking in stature, personality, and pure soul, I’ve never met anyone like her before or since. With a casual “What can I get for you, honey?” she effortlessly builds you the best cocktail you’ve ever had. Again and again and again. 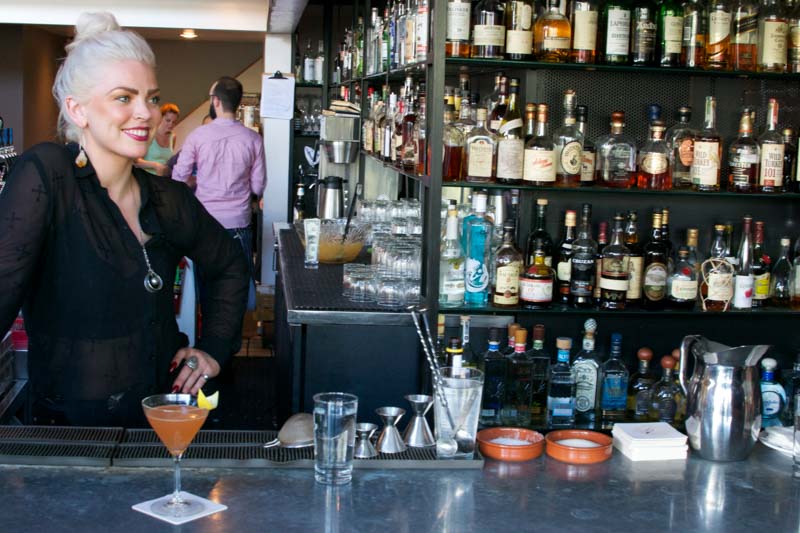 If you’ve ever sat at her bar, you may have been able to sense the magic that is Beckaly Franks. There is a wild sense of creativity, an insatiable hunger for inspiration and an unwavering strength. All these qualities have made her an amazing bartender and an even more remarkable human. 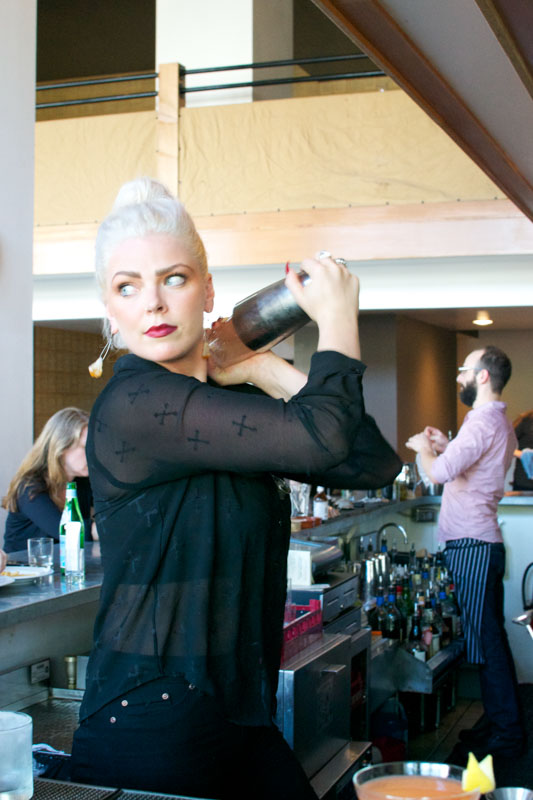 Over the course of three years our relationship has gone from patron/bartender to close acquaintances to dear friends. And so it is with a bursting heart of pride and tears in my eyes that I bid farewell to this incredible woman as she moves on to her next great adventure. She will undoubtedly be doing amazing things overseas so watch out. However today, on your last day behind the wood at Clyde, there is no measure to describe how much you will be missed my sweet friend. 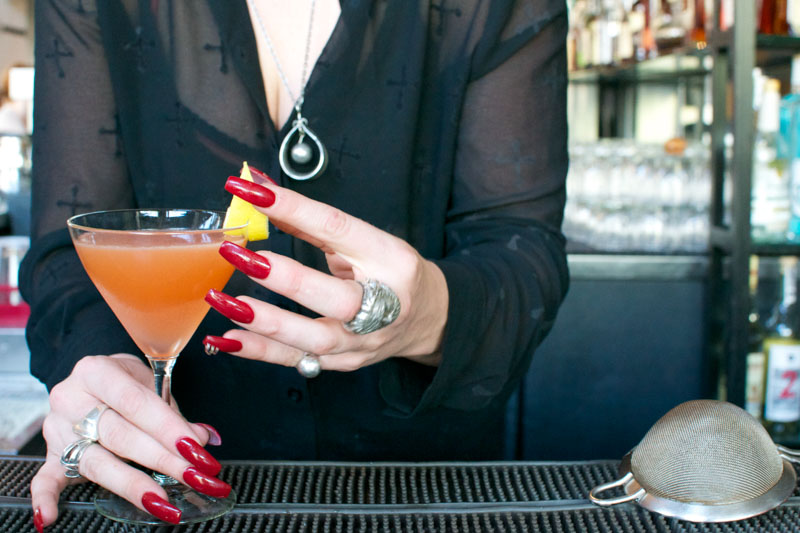 1) What was your first sip of alcohol?
I’m not entirely sure what my first sip of alcohol was. The first time I got drunk it was on fire water. I think I was 12. But I do recall when we would go camping, my step-father used to make gin martinis and I loved the flavour of gin so much that even as a young child he would let me have the ice cubes so I could eat them and get the flavour from the juniper.

2) What would be your 5 bottle bar?
For scotch I lend myself towards really nice cask aging. So an Aberlour A’Bunadh or a Glenmorangie. Gin I would probably do Martin Miller’s Westbourne. For bourbon I would do an Old Fitzgerald 12 year. It’s not in production anymore but it’s a wheated whiskey and it’s fucking delicious. Old fashions taste like bubblegum, it’s sexy. Fortaleza Tequila- it’s one of the most terroir driven, or anything from the Ocho line. Terroir based spirits are kinda my jam. And then Absolut Vodka. Keep it clean.

3) What is your death row drink?
Something high proof. I mean If it’s a death row drink it would probably be the same thing I drink right now…..nah, fuck that. It would be a Jungle Bird. It’s my favourite Tiki cocktail. Blackstrap and pineapple and Campari based cocktail.

4) What is the album that would capture the feel of your dream bar?
Pretty Hate Machine by Nine Inch Nails.

5) What is the one cocktail book that should be behind every bar?
It depends on the bar, the clientele and keeping up with the times. Obviously Jeff Morgenthaler’s The Bar Book applies to our bar because we’re high volume and technique. We also do classic style, high volume cocktails. I’m really inspired by the new Death and Co book. It’s beautiful and it teaches you a lot. The thing about having one book behind the bar is that you need an essential resource, something you can easily look up what you need and you don’t have to flip through a bunch of pretty pictures. The Essential Cocktail Book by Dale DeGroff is a really good read. The Savoy. The Art of Mixing Cocktails. Right now, today, I’m going to say Death and Co

6) What is the one non-cocktail book that should be behind every bar?
The Prophet.

7) What is the most unusual drink request you’ve ever gotten?
I don’t even know anymore. Coming from club cocktails- all the AMFs and Blue Hawaiians and the fact that that shit is coming around again. [For those of you that don’t know- an “AMF” is an Absolute Motherfucker. It’s a long island iced tea minus the coke, add sprite and a float of Blue Curacao].

8) If you could make a cocktail for anybody, dead or alive, who would it be and what would you make them?
Man, here’s the deal: I don’t want to sound super obsessive, and he doesn’t drink anymore anyways, but I want to say Trent Reznor. But that’s not necessarily fair because he doesn’t drink or do drugs anymore. But it would be fun to see him get loaded. I’d probably give him some agave and some beer.

9) If you weren’t a bartender, what would you be?
Most likely a musician. Or a photographer. Or a painter. Or a viking.

10) What is your favourite 3 ingredient cocktail?
Negroni

11) If your shifts behind the bar had a theme song, what would it be?
I want to say Army of Me but it’s a little too abrasive…Actually, Bad Romance. Duh.

12) If you could interview anybody in the cocktail world right now, who would it be and what would you ask them?
I want to talk with the distillers in Japan. I’m fascinated by the culture. I’m fascinated by the terroir. I’d go to Miyagikyo Distilleries, Nikka. All of that. I want to see how they are doing it and not just from production. It’s such an abstract cultural mindset compared to everything we do here. And it really translates through the spirit so I’m quite taken with it. I’d love to go and speak with them, spend time with them and immerse myself.

13) Anything to add about bartending or working in Portland?
I mean sure. If you bring up Portland. We all have to hold ourselves accountable and responsible but the ceiling is super low here. But it’s also vibrant. There’s lots of areas of opportunity and I’d like to see more investment from brands. Limited populace is a problem but we have a lot of pull and we need a little bit more give in this city to have more traction nationally and internationally. We’re one of the most popular cities in the nation right now. We’re growing the fastest and it would be nice to see brands and producers catch up with us and invest in us a little bit more so we don’t have to keep leaving. Portland loses everybody because the capital isn’t here. I constantly watch talented people moving on and spreading their wings which everybody should do but it would be nice to see a little bit more. 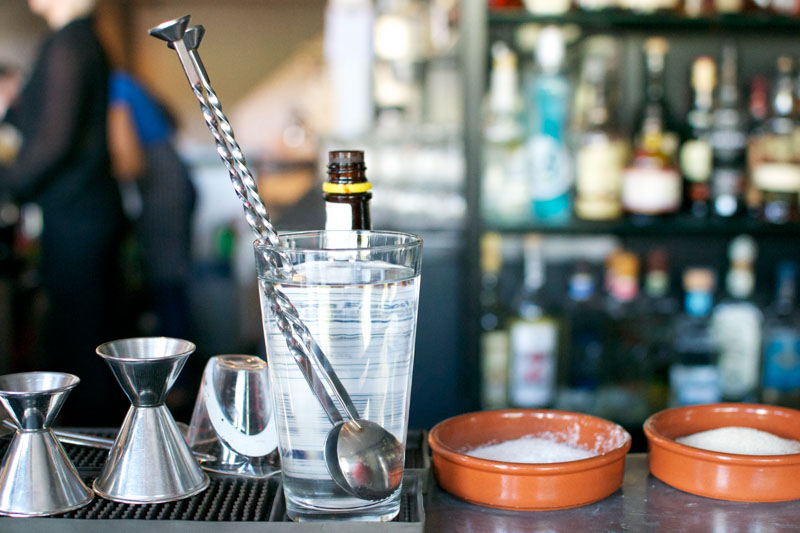 Oh my gosh folks! Where have I been for the past couple of months. Great question! The answer is long and winding but mostly…