I first met Jordan Felix when he was still stirring and shaking at Clyde Common (that seems to be a bit of a trend here, doesn’t it?). He was a lovely, skilled, talented barman that brought a great deal of intention to his craft. So it came as no surprise when, on a return trip to Portland in 2013, I was informed that Jordan had been offered a coveted position at the the newly opened Multnomah Whiskey Library. 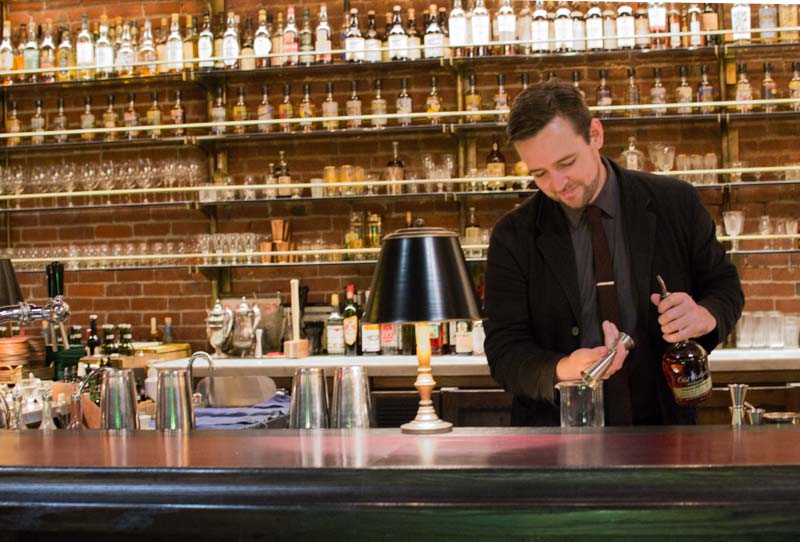 Hailing from Australia, Jordan got his start in the field in Melbourne where he worked as a server. His journey to the Whiskey Library meandered from New York to Australia to New York again, westward to Eugene, Oregon with a final stop in Portland in 2011 where he landed a job at Clyde. Working alongside Bar Manager Jeffrey Morgenthaler, Jordan honed his craft and put his mark on the Portland cocktail scene. 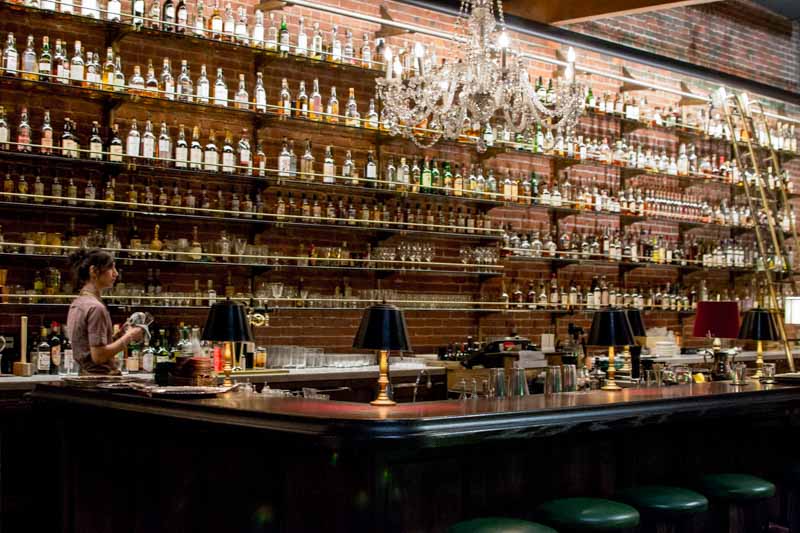 The move from Clyde Common to The Multnomah Whiskey Library was undoubtedly a shift. To step into MWL is to be transported to an old world library. Instead of books, the 12-foot-tall shelves are lined with bottles- 1500 to be exact. The beauty of the space is in the details from the exposed brick walls to the large leather chairs to the wall lined with painted portraits of famous names in whiskey (including Jack Daniel, Torii Shinjiro and a few notable American Presidents). I had the chance to catch up with Jordan at his old stomping grounds over a burger and a margarita to chat about music, books, hospitality and the most beautiful library I’ve ever laid eyes on. 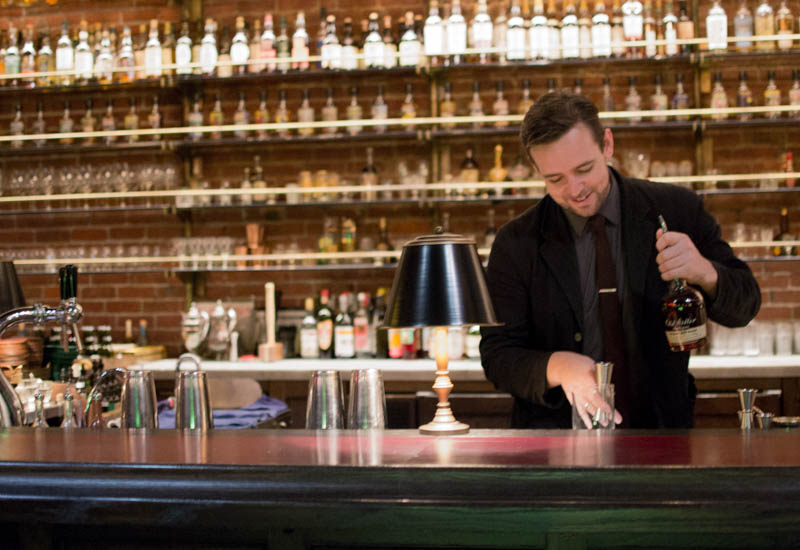 It was my dad’s 21 year old bottle of port that I stole from his liquor cabinet when I was 16 years old. I remember taking the bottle to a party and promptly finishing three quarters of it off and then throwing up considerably. It just wrecked my 16 year old body. Until five years ago I couldn’t drink port.

Was your dad pissed?

He thought it was hilarious. He didn’t really care for port so he didn’t mind in the end.

If you could only have a 5 bottle bar, what would it be?

Beefeater Gin, Absolut Vodka, Havana Club 7 Años for my rum, Talisker as my scotch and Old Fitzgerald 12 Year as my bourbon… if I can get it.

What would be your death row drinks?

That’s a good question! You know, I’d like a rum Sidecar. I really love Havana Club and Havana Club 7 Años is one of my favourite spirits of all time. That as a Sidecar would be amazing.

How long have you been able to get Havana Club here now?

Since it opened up, we can technically have 1-2 bottles from Cuba and I think that’s only been over the last month. It’s not been long at all.

What is the album that would capture the feel of your dream bar?

The one cocktail book that should be behind every bar?

You’re gonna be a kiss ass right now aren’t you?

Yes, i’m totally going to be a kiss ass, just because it encapsulates technique. I think a bar is more it’s bartenders, it’s not necessarily it’s recipes. If bartenders can’t get the technique right and can’t execute it right, your drink’s gonna suck and it’s gonna suffer. Otherwise it would be  this book called Drinks which was a really influential one for me.

It’s a toss-up between two: Setting the Table by Danny Meyer or Cosmopolitan by Toby Cecchini. It’s about Toby’s experience as a bartender throughout the years. It’s reminding you of your place in society and how bartenders are important and what you do makes a difference. It relates to bartenders. Every single struggle you’ve had about whether bartending is a part-time job or a full-time career. You’ve always had doubts or your parents have doubted you. This covers it all. It’s a very small book, cheesy, sort of 90’s references about Cosmopolitans and the Lower East Side of Manhattan but it’s just a great book.

What has been your most unusual drink request?

Someone ordered an Amaretto with single malt scotch, banana liqueur and fresh lemon, shaken up. It was called The Head Banger. It was a bizarre drink. It came up like six weeks ago. I asked them where they heard of the drink. They said it was from a classic cocktail book. So we did something along the lines of a scotch amaretto with a hint of banana. They loved it but we did it as a stirred cocktail with a lemon twist instead of trying to shake it up.

It acutally wasn’t too bad in the end. I put a quarter ounce of the Giffard Banana in there and it managed to shine all the way through all the elements of the drink.

If you could make a cocktail for anybody, dead or alive, who would it be and what would you make them?

I’d love to make a cocktail for Will Ferrell. I think it would be a real fun drink. I’d like to make him some amazing Mojito and have it be exuberant with a ridiculous amount of swizzle sticks and have him really enjoy himself.

If you weren’t a bartender, what would you be?

I’d be a pilot. As a kid I really wanted to be a pilot. I love the idea of getting up and going. Sadly I have astigmatism in my eye so I wasn’t right for the flying academy. Instead I ended up studying Japanese in school. I majored in it and lived in Japan and taught English. So in terms of a job that I can do other than bartending, it would be teaching or translating.

What is your favourite three ingredient cocktail?

I gotta say I love The Boulevardier as a cocktail. Finding that right whiskey with and right bitterness with the Campari and vermouth. At The Library we use a vermouth blend where we take 3 vermouths and blend them together. It just plays really well with all kinds of whiskey. I think a Boulevardier can really sing so that’s one of my favourites.

If your best shift behind the bar had a theme song, what would it be?

It’s funny. There was one night where Jeff and I worked together on a Monday and we put Hall and Oates on. And it was so awesome. Flights come in from the east coast and people were coming in a sitting along the bar, enjoying themselves. People seemed to be enjoying how Jeff and I were playing off of each other and then Private Eyes came on. The whole bar started clapping at the appropriate parts in the song. We had the whole bar doing it. It was something magical. So probably something fun like Hall and Oates or Todo. Something 80’s would be perfect.

If you could interview anybody in the cocktail/spirits world right now who would it be and what would you ask them?

I would interview Dave Broom. He’s an amazing leader in scotch whiskey. His thoughts and processes of how to approach whiskey in all kinds of ways is amazing. He talks about highballs coming from all parts of Asia- Japan, China, Korea, Singapore. Mexican Coke with Laphroaig 10- amazing mixer. Dewars 12 with iced green tea- amazing mixer. The way that he plays with whiskey flavours, particularly scotch whiskey…I want to pick his brain on it. A big inspiration of mine is Michael Jackson as well. Michael Jackson said that whiskey is the manifestation of where it’s made and I couldn’t agree more. Aged whiskey explains where it came from in every single part of the process. Dave would be able to answer my questions and perhaps give me a little more of an interesting take on where whiskey comes from.

Is there anything that I didn’t ask that you wish I would have? Or anything about bartending or The Library in general?

The industry, the way I see it- we’re all here for being of service. I would love to see more classes about reading customers. People walking in that door may have had a really great day, they may have had a really crappy day, they may be celebrating something. There should be more classes about how bartenders read people, more on hospitality and education. That’s what we’re trying to do with The Library right now- less about the 1500 spirits, less about the cocktails coming out on the cart. In our second year, we really want to focus more on hospitality, education, and being able to give a great experience from start to finish. I think that if, as a community, we can talk more about hospitality and education, how to read people, how to understand people, how to read where they’re at, how to be better barmen and bar women, we’ll all further ourselves. Less about getting drunk all the time…which is always nice but hospitality and education is paramount. 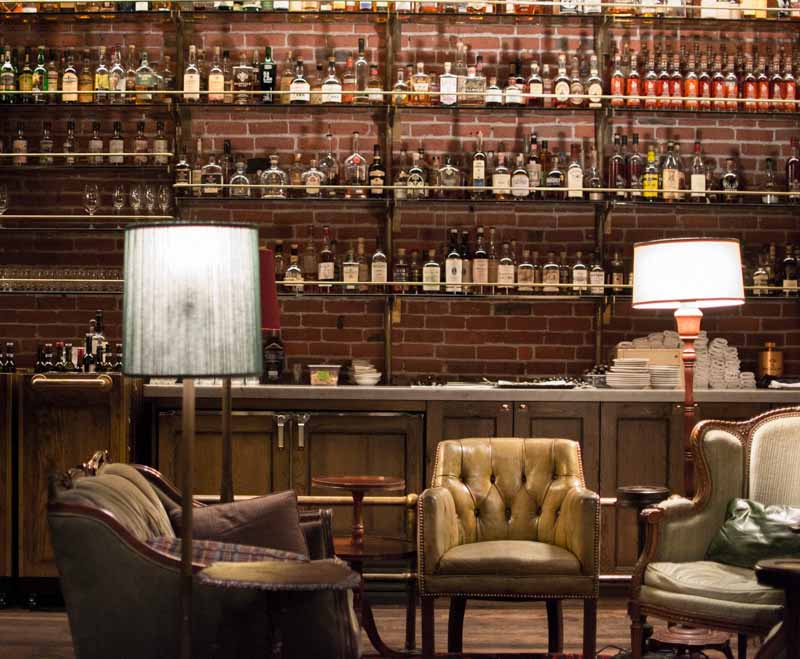 Lately I’ve been getting requests to write a post on building your own home bar, specifically with regard to bottles, tools and barware. While…