Let me just start off by saying that any woman with a portrait of her cat tattooed on her arm is my kind of people. Alise Moffatt of Portland’s Shift Drinks falls directly into this category. I was officially introduced to Moffatt earlier this year on a brief jaunt to the city. I was sitting at her recently opened bar, enjoying a glass of bubbles and some tomatoes on toast that I’ll never forget (they were just that good). I recognized her tattoos first (because I’m horrible with names and faces), and quickly realized that this was not the first time we had met. Perhaps it was at one of her previous gigs- Gruner? Multnomah Whiskey Library? Either way, our paths had most definitely crossed before because the jet black ink of trees crawling up her forearm was firmly stitched in my memory. 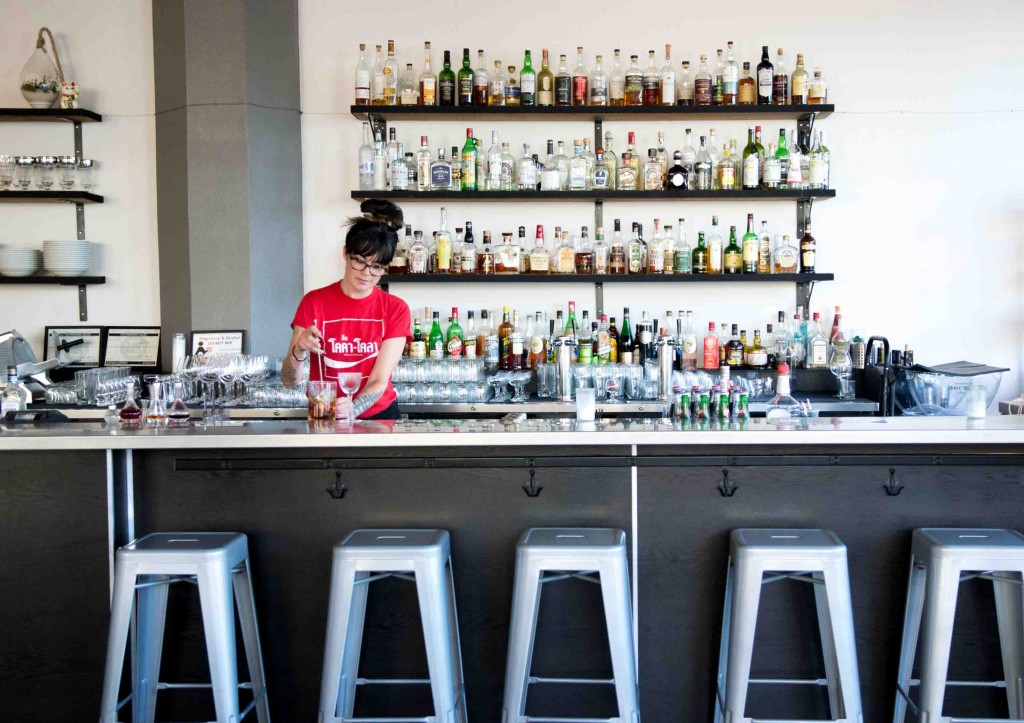 Moffatt made the move from Southern California to Portland in 2005. Since then, she has tended bar at a broad spectrum of PDX establishments. In partnership with Anthony Garcia, Moffatt opened Shift Drinks in early 2015 and it has quickly become a local (and personal) favourite. Her skills are immediately apparent with the first sip and her wit shines through her menu with cocktail names like “Besos for Pesos” and “Physically Forgotten”- a reference to Paul Simon’s “Diamond’s on the Soles of her Shoes.” It was an exercise in poise when I sat down to interview Moffatt during Feast Portland. Because (spoiler alert), when someone says their favourite fictional hero is Professor Snape, my involuntary reflex is a high-pitched ‘squee’ of excitement (and I squee with the best of ’em). And on that note…. 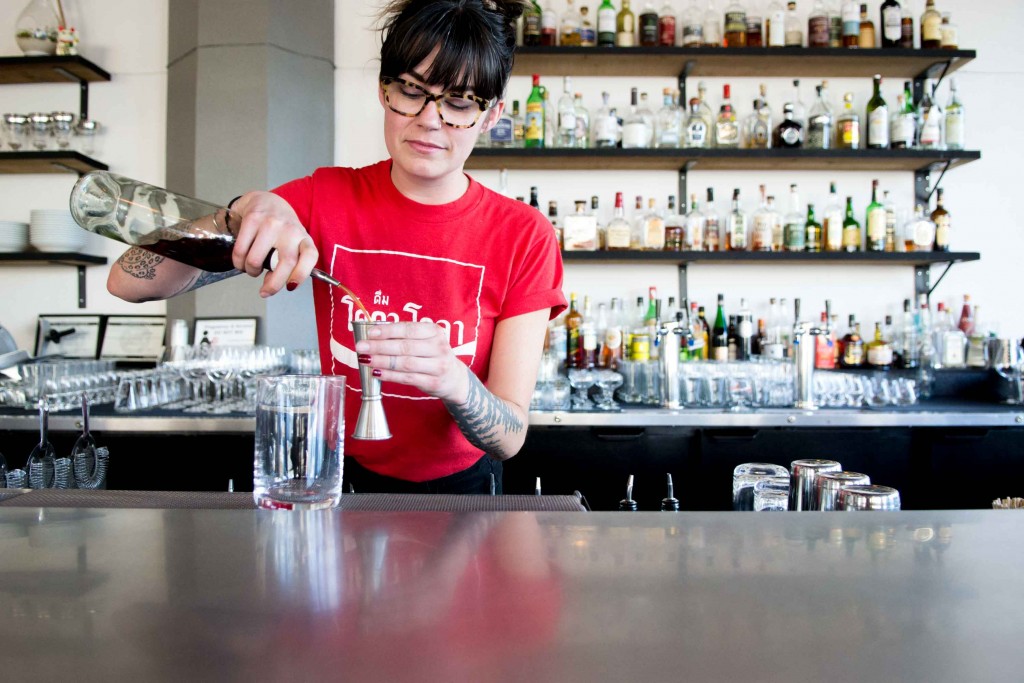 What turns you on?
Chest hair and crooked teeth. I actually have an ex-boyfriend’s tooth tattooed on me.

What turns you off?
Sloppiness.

What sound or noise do you love?
The sound of popping a bottle, like a wine bottle.

What sound or noise do you hate?
My cat’s cry for food. Peter’s cry is the worst. It’s very specific to him wanting to eat.

What profession other than your own would you like to attempt?
I really wanted to be a marine biologist when I was a kid. I grew up on the ocean and I love it. It’s a very big connecting element in my life.

What profession would you not like to do?
Be a trash person. That seems like it would suck.

If heaven exists, what would you want God to say when you arrive?
What’s up?

Which talent would you most like to have?
I would like to be able to speak any language. I would start with Japanese.

Your favourite fictional hero?
Professor Snape. He was such a badass. He put on this whole thing all because he loved this one woman so much. It’s the most heartbreaking, romantic, saddest death ever.

Which historical figure do you most identify with?
I almost want to say something really weird like Johnny Appleseed. I use the word “feral” a lot. Like being a feral human- going out of your element into a new one and taking over. That doesn’t really seem appropriate but it was the one that came to my head first. That or Marie Antoinette. I’m very indulgent and sometimes can be very selfish in that way. It’s not a good thing. It’s something that I have to work on all the time. But I feel like a child bride and being very indulgent somehow does describe me in a weird way. I would like to say somebody more like Abraham Lincoln, working for the people but I just don’t think that’s really appropriate for my personality.

What is your most treasured possession?
My ability to laugh at anything. I don’t keep many of things. I throw a lot of things away but I like laughing at everything.

If you could choose to come back as something in your next life what would it be?
A snow leopard. They’re awesome. I grew up as an only child and I’m totally ok with being elusive. They live out in the mountains and they usually just hang out with their kids and sleep all the time. And they’re covered in fur so you’re soft all the time. You can cuddle with yourself.

If you could only have a 5 bottle bar, what would they be?
Beefeater Gin, Xoriguer Mahon Gin, Springbank 15 Year, Kilchoman Machir Bay and a bottle of Fernet.

What would be your death row drink?
Champagne. A magnum of it.

What’s the one non-cocktail book that should be behind every bar?
I recently re-read The Stranger which is good. I think it appeals to a lot of people in this industry because we can identify with it. It’s one of those books that, if you’re sitting on the other side of the bar, you just get it.

If you’re best shift behind the bar had a theme song, what would it be?
I’ve had so many of those nights with so many different songs. Minnie Ripperton’s ‘Les Fleurs’ is amazing. It’s really cool and beautiful and soulful. It has this epic crescendo that just explodes. My friend Jeffrey Dillon who runs Bathtub Gin in New York- we’ve definitely had those nights working at Rontoms where that song is playing and we’re just high-fiving and having a great shift.

If you could only be known for one cocktail that you’ve created, what would it be?
There are two that jump to mind. One is a variation on a classic. I do a drink here called the Besos for Pesos. It’s a mulled wine kalimotxo. I love mulled wine and I love LOVE kalimotxo so it’s two of my favourite things combined. The other one that is really popular on the list that’s more of a signature is called The Physically Forgotten. It’s gin, Cynar, maraschino, orange bitters, up with a lemon twist. It’s very very simple but still very cool. It’s uses my favourite proportions. I call them The Royal Three. It’s 1.5, .75, .5. Super simple, really direct. 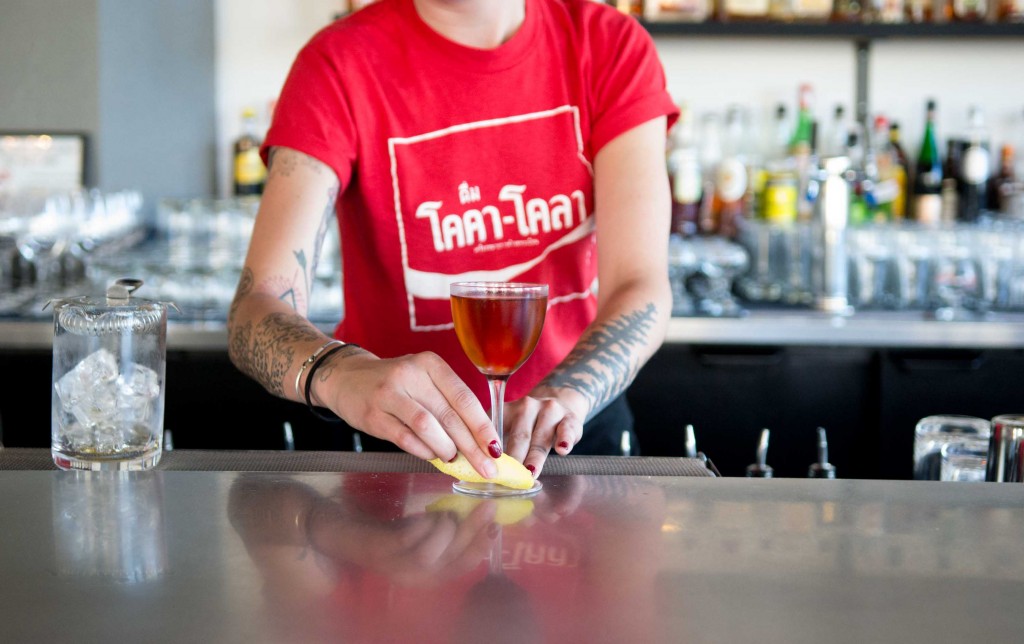 Stir all ingredients over ice. Strain into a chilled cocktail class. Garnish with a lemon twist. 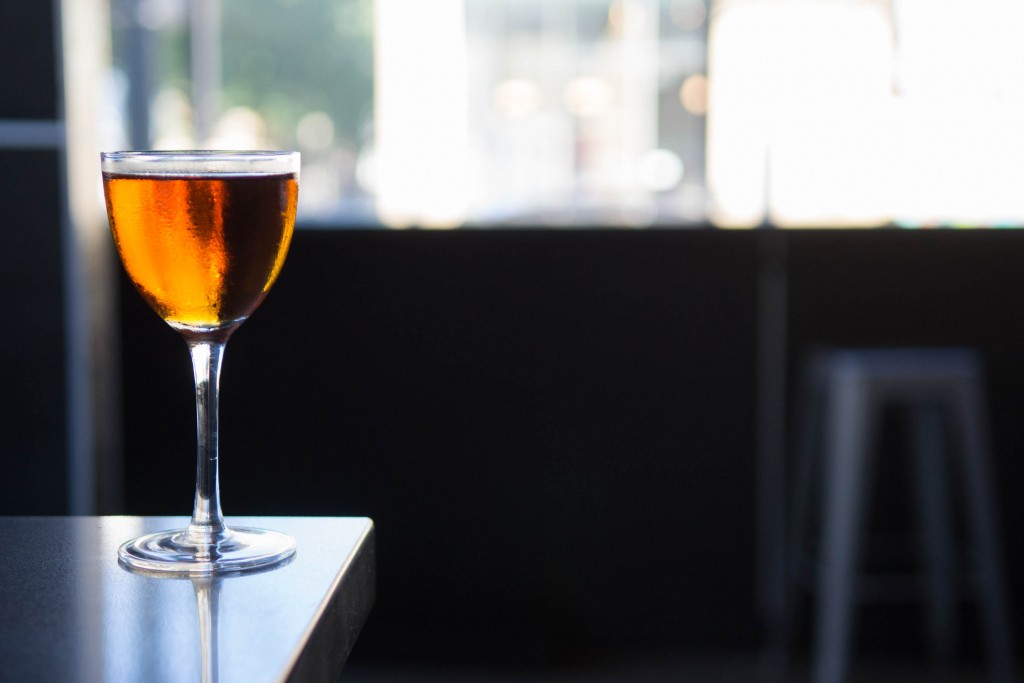 I’m a big fan of hotel bars, both at home and abroad. There’s a certain romanticism to sipping a cocktail among wandering strangers. Some…