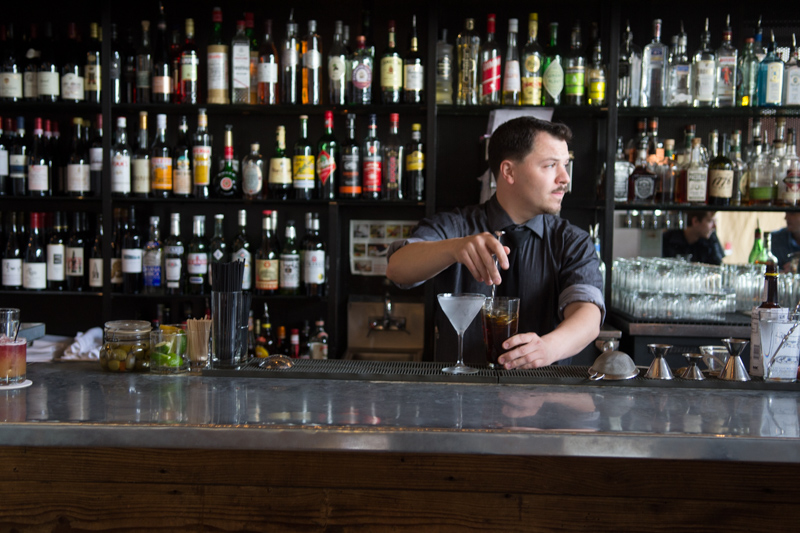 Daniel Parker Guidry (or DPG as he is affectionately called by his colleagues and friends) found himself at a 90 year old woman’s birthday party the first time he decided he wanted to make a career of working in the service industry. A server in Newburg, Oregon at the time, DPG witnessed a family come together at his restaurant to celebrate the momentous occasion and realized that for him, there was something remarkable about being a part of other people’s experiences. A penchant for providing exceptional service combined with a desire to work with his hands eventually led him behind the bar- first at Kennedy School then The Parish and eventually Pepe Le Moko. We caught up with DPG upstairs at Clyde Common where he is currently tending bar to talk music, Dostoyevsky, great bottles of rose and cocktails (for good measure). 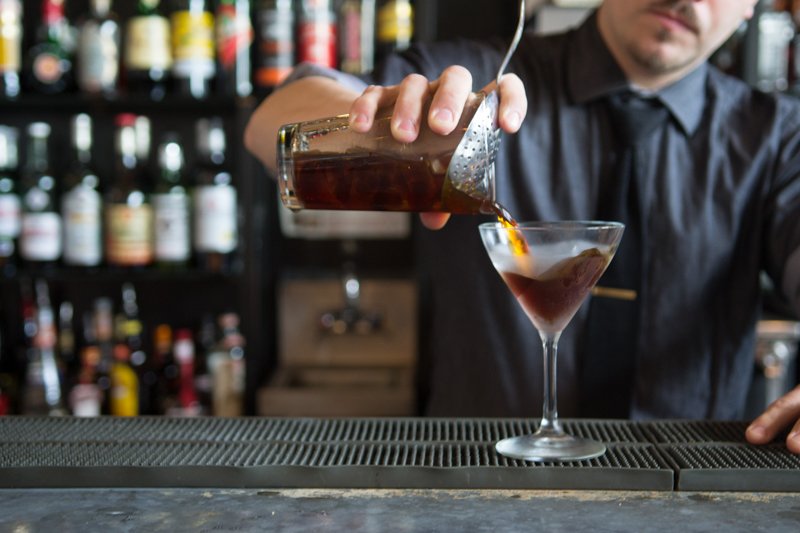 What did you think you were going to be when you grew up?
A writer. Fiction and eventually philosophy.

Was there a specific moment, experience, or conversation that made you decide to make a career of bartending?
It’s funny. It was as a server. I worked at a little restaurant in Newberg, Oregon called The French Bear. Matt and Holly Kinne owned it. They were both winemakers for McKinley. We had these regulars that wanted to have their grandmother’s 90th birthday there. We were normally closed on Sundays but we opened for the occasion. We set up one big table for about 10 people and we were doing this really fantastic pre-fixed dinner that they enjoyed, lots of wine. And as they all went to leave, everybody was crying- just super excited for this woman’s 90th birthday. It was at that moment that I knew there was something about being a part of people’s experiences in that way that I really cared about. But I also really like beverages and making things with my hands so I saw the bar as a way to provide service but also to craft things.

How did you end up moving into bartending?
I fought for it at a place called The Kennedy School. It was 2008. The economy sucked. I was working as a glorified maintenance employee. I was doing custodial work and I said that I wanted to transfer into the bars. Through catering I started bartending and then eventually worked my way into the bars. While I was there, I did what I alway do which is just research on my own and just figured out where I wanted to go in the industry. And I decided I wanted to work somewhere like Clyde Common. I wanted to make cocktails in a busy environment but I knew I needed to work on learning how to make them well. So that’s where Pepe Le Moko came in. I started working on my drink base and Pepe gave me a really good opportunity to just hone in on that.

Did you seek them out or did they come and find you?
It was actually kind of both in a way. In a family kind of way. Freddy [Day Bartender at Clyde Common] was one of my regulars. Really great guy. We had Eugene in common and bartending in common, positivity in common. He came to me and let me know that they were going to be hiring for Pepe. He offered to introduce me to Jeff [Morgenthaler]. I came into Clyde that night and Jeff was working.  We just chatted. He said that he’d love for me to come to the interview that they were going to be holding. It was a big group interview. We sat down and he wanted to tell me about the program and find out if I would be interested. I said yes and that’s the story.

If you could only have a 5 bottle bar, what would your five bottles be?
Plymouth gin, a tonic, Old Grandad Whiskey, Angostura Bitters and a bottle of Chinon Rose.

What would your death row drink be?
You know, I’m gonna say a really delicious bottle of Chinon Rose.

One cocktail book that should be behind every bar?
David A. Embury’s The Fine Art of Mixing Cocktails.

One non-cocktail book that should be behind every bar?
A really awesome picture book of mountains.

If you could make a cocktail for anyone, dead or alive, who would it be and what would you make them?
Oh man, I’ve thought about this one. We talk about it behind the bar and I’m always mixed. I never know because it’s so hard. I always think about who could walk into my bar that i’d be amazed to see and that’s always Nas. I think he’s awesome. I’d probably just pour him a glass of wine. But you kinda have to do anything with Hennessy at that point.

If your best shift behind the bar had a theme song, what would it be?
Slim Harpo- Shake Your Hips.

What turns you on?
Confident sass

What turns you off?
Ego.

What sound or noise do you love?
When you’re in the mountains and it’s silent but not really silent.

What sound or noise do you hate?
The sound of people eating. I fucking hate it.

What profession other than your own would you like to try?
Oyster farming or wine making.

What profession would you hate?
I guess be a politician. That sounds horrible.

If God exists, what would you like him to say when you arrive?
Everything is how it’s supposed to be.

Which talent would you most like to have?
I would love to have the talents of a chef.

Who is your favourite fictional hero?
It’s a tossup between Calvin from Calvin and Hobs or Alyoshka from Brothers Karamazov.

Which historical figure do you most identify with?
I guess it’d be someone like…….no. Pass. I can’t think of anyone.

What is your most treasured possession?
My optimism.

If you could only be known for one drink that you make, what would it be?
I think it would either be a Cocktail Louisiane which is Rye Whiskey, Sweet Vermouth and Benedictine in equal measure with a portion of Absinthe, Angostura and Pechaud’s Bitters. New Orleans Classic cocktail. There’s another New Orleans classic called The Creole which I like. It’s made with Amer Picone, Rye Whiskey, Sweet Vermouth and Benedictine. I make ‘em both great. They’re both classics. 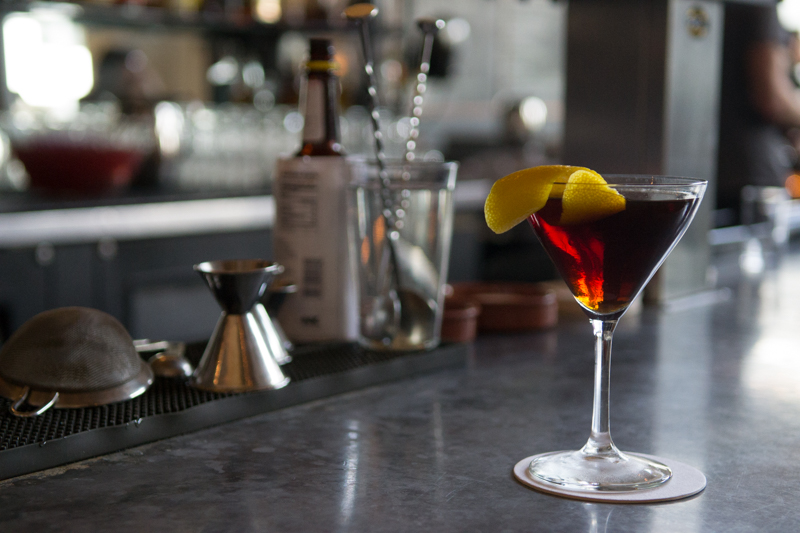 Stir ingredients over ice. Strain into a chilled cocktail glass and serve with a lemon twist.

Cocktail Of The Day- because it’s always cocktail hour somewhere in the world. You know, for all the cocktails I’ve had over the years,…