My recent visit to Attaboy was a great reminder to do your research. Had I done so, I would have learned that to get into the bar, you have to knock. I also would have learned that there is a closed-circuit camera pointed at the sidewalk out front to notify staff when a guest is awaiting entry. Perhaps, had I known this when I arrived ten minutes before opening, I wouldn’t have sat down in the middle of the sidewalk. Instead, the staff undoubtedly watched me on the tiny black-and-white CCTV sitting on the back bar as I frantically rifled through contents of my purse searching for my notepad. Oops….lesson learned. The bar team was kind enough to pretend they hadn’t noticed and invite me in anyway. Thanks for taking pity on the sidewalk-sitting dork guys! 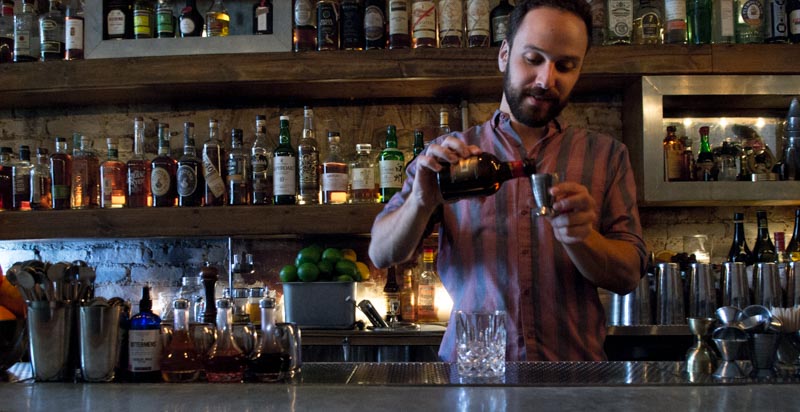 In 2013, Sam Ross and Michael McIlroy, both alumni of Sasha Petraske’s Milk and Honey, took over the space and operations and made it thoroughly their own. To be fair, I never had the opportunity to make it to Milk and Honey and so never used the much maligned reservation system that Ross and McIlroy did away with in favour of a first come, first served model, but I’m told it isn’t missed.

The unmarked entrance on an unassuming street gives a subtle nod to a well kept secret. Likewise, the aforementioned knocking creates an air of anticipation. You knock. You wait …You hope you have the right door. When the door does open, it’s exciting. One doesn’t simply enter Attaboy, they are let in (kinda like Mordor).  Attaboy is as much about what it doesn’t have as what it does. What it has is great cocktails. What it doesn’t is a sign, a menu or any pretension. 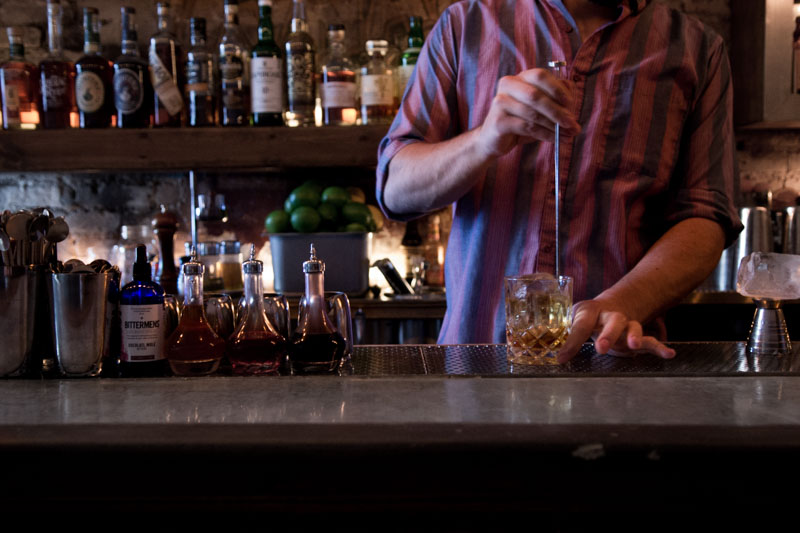 Shortly after my arrival, a gentleman took a seat next to me, ordered a drink and proceeded to dive into a novel. Not long after, a couple took a seat at the end of the bar, clearly in the throws of date number three…possibly four. They engaged in witty, flirtatious banter over an old fashioned and something gin based. It was a mixed bag of patrons- each guest looking for something completely different than the next.  That’s the thing about a bar with no menu. It forces you to read your clients that much closer. Because you’re not only responding to their verbal cues (for example- light, fruity, effervescent), you are reading their mood, their body language, their implicit hopes for what they want their night to be. As their bartender, it’s your job to bring all of that to life in 2-3 ounces and a single glass. It’s the risk of running a bar with no menu. But when you staff that bar with a team that’s more than up to the task, it’s no risk at all. And that’s what Ross and McIlroy have done exquisitely. The team at Attaboy are a group of no nonsense, attentive bartenders. They take their task seriously and they do a mighty fine job.

So what does one order in the bar with no menu? If I were you, I’d leave it in the capable hands of some of the best bar talent New York City has to offer. But in the interest of this article, I asked barman Dan Greenbaum to make me a classic cocktail he thinks doesn’t get ordered enough. And behold! The Rusty Nail. The man was right, this classic isn’t ordered nearly enough! 2 oz Scotch Whiskey, 3/4 oz Drambuie and smooth as all getup. 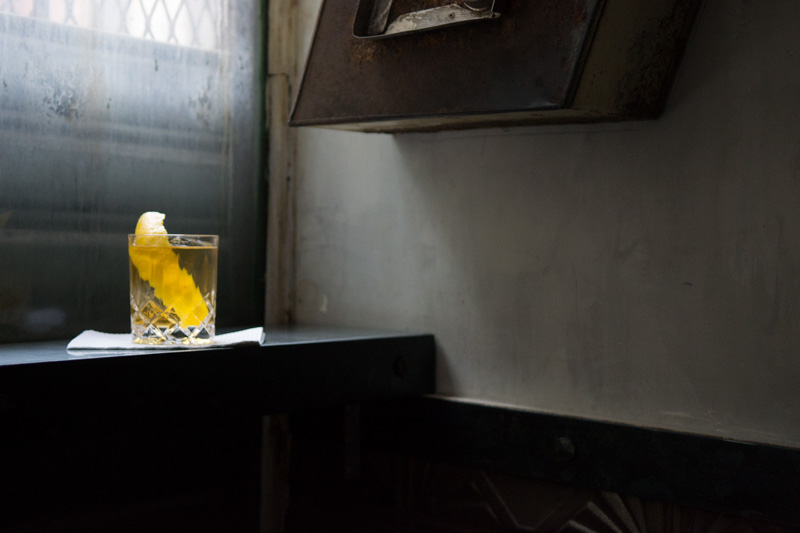 I often get asked why I started writing this blog in the first place. The true answer is such a mixed bag and it’s…